On Saturday, August 20, 2016, the MHPHOA made a presentation to a large number of Carson mobile home residents along with city and state officials regarding KSFG/SCM. During the meeting, it was discovered that KSFG/SCM have had twelve (12) mobile home owners sign long-term leases in Carson Gardens Trailer Lodge which has 97 spaces – that’s 12% of the mobile home park spaces that have been lost to the nefarious business practices of the new owners Kort & Scott Financial Group.

The MHPHOA are currently awaiting statistics for Laco Mobile Home Park. We are going to surmise that a similar routine has occurred and that at least 10% of Laco’s 94 spaces (9) have been converted to long-term leases and no longer under the City of Carson’s Mobilehome Space Rent Control ordinance.

No Park Owner may require, directly or indirectly, that any Homeowner or prospective Homeowner sign a lease or rental agreement that provides that it shall be exempt from local rent control or provides for space rent in excess of that permitted by this Chapter as a condition of tenancy in the park and no Park Owner may deny a tenancy to a prospective purchaser of a mobilehome in the park on the ground that the prospective purchaser will not sign such a lease or rental agreement. (Ord. 91-941U, §1; Ord. 91-941, §1; Ord. 92-970U, §2; Ord. 92-970, §2; Ord. 98-1130, §19)

Based on the above municipal code (ordinance), the leases being offered by KSFG/SCM, and signed by mobile home owners, appear to be in direct violation of the Carson Mobilehome Space Rent Control §4710. KSFG/SCM may have obtained these long-term leases through the use of cash incentives, coercion, compulsion, and/or duress. The MHPHOA believe the KSFG/SCM long-term leases are Unconscionable and we are suggesting that the City of Carson deem the KSFG/SCM leases as Unlawful Contracts and have them rescinded.

Note: There is a section in the Carson Municipal Code that provides Kort & Scott Financial Group protections under the California Mobilehome Residency Law (MRL §798.17) from the above lease regulations. It is somewhat obscured within §4711(c) and states the below.

(c) Within ten (10) days of executing any rental agreement or lease which is exempt from this Chapter pursuant to Civil Code Section 798.17, a Park Owner shall register that lease with the Department on a form provided by the City, which specifies the beginning and ending date of the lease and the rental rate(s) applicable during the duration of the lease, and shall attach thereto a copy of the lease.

If these unfair business practices are allowed to continue at their current pace, KSFG/SCM will convert both Carson Gardens Trailer Lodge and Laco Mobile Home Park to 80-90% leased spaces, no longer under rent control, within 10 years. KSFG/SCM have performed this routine in Granada Villa Mobile Home Park in Santa Clarita which also has a Rent Control Ordinance. Unfortunately, as of August 2016, through the egregious and predatory business practices of KSFG/SCM, only 11 of the 179 spaces remain under rent control.

According to online records, KSFG purchased Granada Villa in 2002. It has taken them less than fourteen (14) years to convert 94% of the mobile home spaces to long-term leases which waives rent control for those spaces – indefinitely. The City of Santa Clarita, California have lost a valuable plot of affordable housing to the KSFG/SCM unconscionable long-term leases. Average space rents in 2016 for Santa Clarita mobile home parks are $725 – space rents in Granada Villa Mobile Home Park are $1,350.

On Wednesday, December 2, 2015 at 6:00 PM, the City of Carson, California held a Mobilehome Rental Review Board meeting. Mr. Abraham Arrigotti, President of Sierra Corporate Management was present and asked by a board member if it was true that SCM were offering residents at Carson Gardens Trailer Lodge a $450 cash incentive to sign long-term leases? Mr. Abraham Arrigotti responded with a “yes” and counsel (Thomas W. Casparian) for Sierra Corporate Management confirmed that this was legal and it is encouraged. 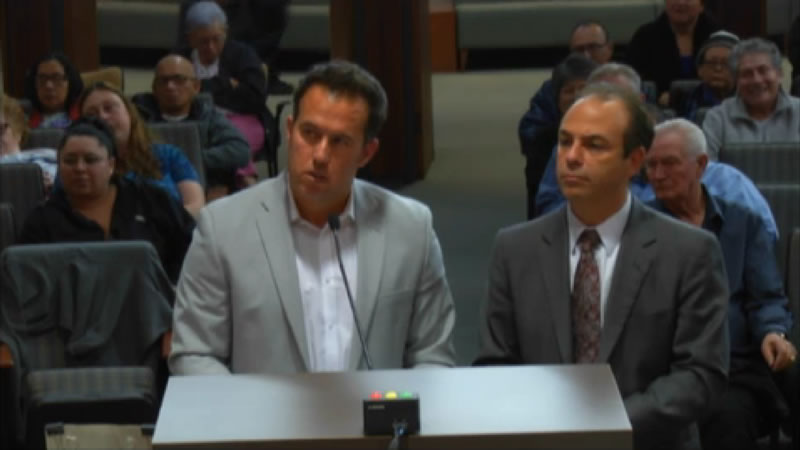 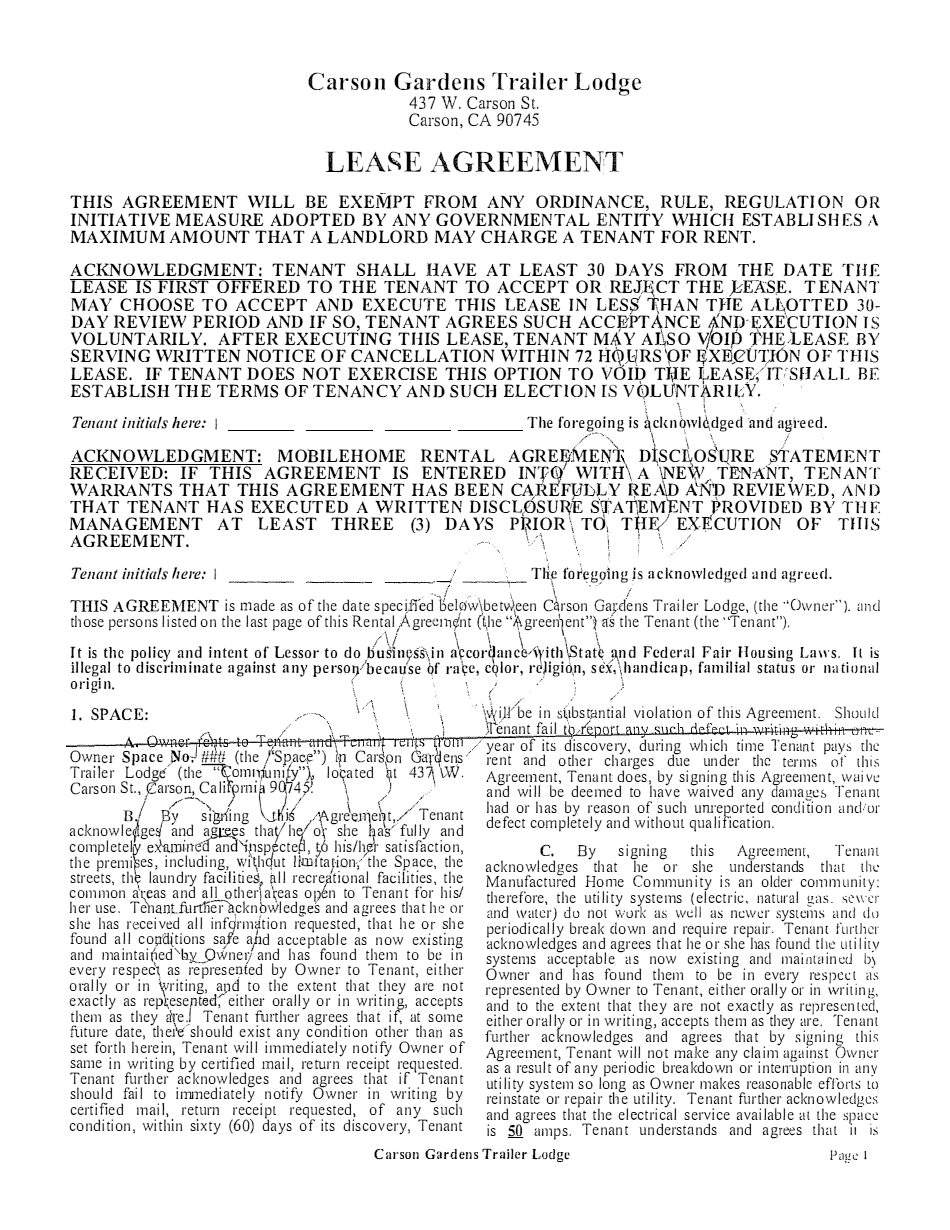 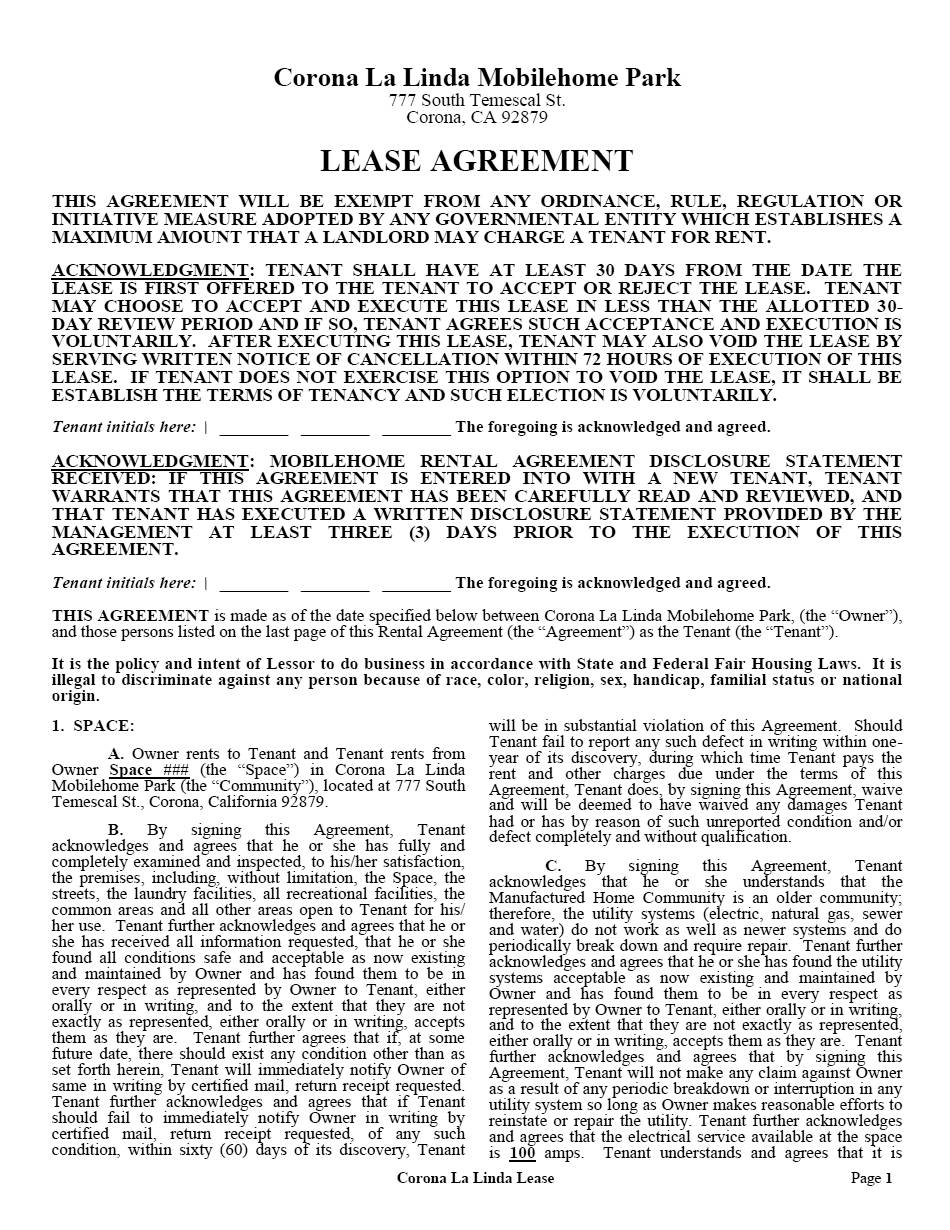 Do not sign any documents from Sierra Corporate Management, seek immediate professional and/or legal advice. You must review all documents from Sierra Corporate Management (SCM) with a knowledgeable representative. All documents to be signed by residents must be reviewed by an experienced SCM forensic document specialist. DO NOT sign a long-term lease! As soon as you sign a lease agreement greater than one (1) year, you have waived your rights to any current and/or future rent control ordinances that may be in force or enacted. You have thirty (30) days to review the lease – and you have options – see the Information panel.

18. Can the park manager force residents to sign a long-term lease, causing them to lose rent control protections?

If the resident is currently a homeowner residing in the park, then they may reject a long-term lease and opt for a shorter-term lease. In the case of a prospective buyer of a home in the park who is not yet a resident, their right not to sign such a long lease is less clear. A rental agreement or lease with a term of more than 12 months is exempt from any rent control ordinance. (Civil Code §798.17) The resident may reject a long-term lease after reviewing it and opt for an annual or month-to-month rental agreement. (Civil Code §798.18) If the resident elects to have a rental agreement for 12 months or less, the rent charges and conditions shall be the same as those offered in the longer-term lease during the first 12 months (Civil Code §798.18). Not all long-term leases are bad for homeowners, and some may provide rent stability for years that month-to-month or annual tenancy does not, particularly in localities where rent control will probably never be enacted. (See also #19)

Not in most cases. Civil Code Sec. 1632 provides that a person engaged in a trade or business, who negotiates a contract or lease – including a rental agreement covering a dwelling, apartment or mobilehome – in Spanish, Chinese, Tagalog, Vietnamese, or Korean, shall provide the other party, if he or she requests it, with a written copy of the contract or agreement in that language prior to execution of the document. However, this provision does not apply to contracts or agreements negotiated with the use of an interpreter, or to month-to-month rental agreements. Additionally, most mobilehome parks do not “negotiate” their leases with homeowners or prospective homeowners, but rather offer the lease on a “take it or leave it” basis.

20. Does a resident have to sign a long-term lease, or are there other options?

Homeowners living in a park have the right to review the proposed long-term lease and to reject it within 30 days and opt instead for a 12-month lease agreement or month-to-month rental agreement. (Civil Code §798.17(b)) If a homeowner rejects a long term lease, then the park cannot increase the rent above the terms provided for in the rejected long-term lease, for a year after the rejection date. (Civil Code §§798.17(c), 798.18(b)) A homeowner living in the park is entitled to a 12-month agreement or month-to-month, if they ask for it. (Civil Code 798.18(a)). (See also Question #18)