2018 Jan – Kort & Scott Financial Group owns multiple mobile home parks throughout the United States. I am complaining about Sierra Corporate Management. This corporation owns over 36 parks within California. This corporation's sole purpose is to take advantage of their residents (especially Seniors) through fear, fraud, and intimidation. They harass and mislead tenants into signing 25-year leases under the guise that they will save money because they will only raise the rent up to 5%. But that is an oxymoron, because California law only allows for a yearly 3% increase for mobile home owners. This practice allows them to remove all the constitutional protections that tenants rely upon. If that’s not enough (monies), they overbill tenants for their rent utilities and fail to maintain their own property. For example; garbage fees. If you look up your local garbage fees they do not charge what is reflected on the owners billing statement. The fraud is so blatantly in your face. But, the chicken always come home to roost. Sierra Corporate Management has numerous lawsuits pending against them because of their illegal practices regarding mobile home owners. If you live in one of their parks complain to your local government just as we have in Redwood City, California
Sheryl P.

2016 Nov – Class Action Lawsuit: On Tue, Nov 15, 2016, the Court certified a class as follows: The Court certifies the first cause of action for violations of Civil Code §798.17(d), 798.19 and 798.56 on behalf of all persons who have paid rent for a mobile home space at Bayshore Villa Mobile Home Park since May 29, 2011, and who have entered into a long-term lease with Defendants, except those whose long-term lease provides the same amounts for beginning monthly rent and the rent actually charged for the beginning period of the lease.

2015 – Amaranda used all of her savings to purchase a mobile home and signed a 25-year site lease, written in English legalese, with Bayshore Villa Mobile Home Park. Speaking to Amaranda in Spanish, her native language, the park manager had told her that the rent would only go up by 5% each year. The park owner had been using incomprehensible leases and suddenly raising rents throughout the park.

Amaranda, a single mother of two boys, worked cleaning houses to give her kids safe and stable housing and better opportunities. She used all of her savings to purchase a mobile home and signed a 25-year site lease, written in English legalese, with Bayshore Villa Mobile Home Park. Speaking to Amaranda in Spanish, her native language, the park manager had told her that the rent would only go up by 5% each year.

Initially, the park charged the appropriate amount but, after a few years, it began to raise the rent astronomically. Amaranda’s space rent went up 79% in 5 years and became unaffordable. She could not afford to move her mobile home or move to an apartment in San Mateo and the surrounding counties. Moving far away would mean a different school for her youngest, interrupted medical care for her oldest, and losing her business clients. She would also lose the investment in her mobile home.

Amaranda was not alone. The park owner had been using incomprehensible leases and suddenly raising rents throughout the park. Amaranda and other Bayshore families decided to stand up to this injustice with the help of Western Center and our co-counsel, the Legal Aid Society of San Mateo County and Cotchett, Pitre & McCarthy. She filed a class action lawsuit, alleging that the park owner, one the nation’s largest management companies, had violated state and local law, had breached its lease with residents, and had engaged in unfair business practices. 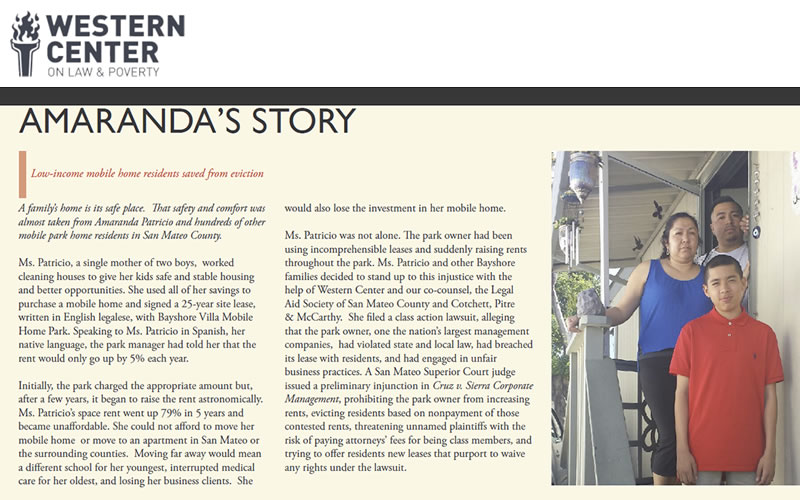 A San Mateo Superior Court judge issued a preliminary injunction in Cruz v. Sierra Corporate Management, prohibiting the park owner from: increasing rents, evicting residents based on nonpayment of those contested amounts of rent, threatening unnamed plaintiffs with the risk of paying attorneys’ fees for being class members, and from trying to offer residents new leases that purport to waive any rights under the lawsuit.
Western Center on Law & Poverty

2015 Nov – This is not a place you want to live. Rent is way too high, and they are known for illegal activity like raising rent when there is a rent freeze in effect. They do shady stuff like charge residents when non residents illegally dump, and tell you to call the cops on children walking to the playground. They seem to think each space is worth $400k and the park is worth 57 million even though it is only appraised at 4 million. The owner is a greedy man who is only out for himself.

2014 May – On Thu, May 29, 2014, residents from Bayshore Villa Mobile Home Park filed a Civil Lawsuit (Case No: CIV528792) against the Kort & Scott companies that own their park including Sierra Corporate Management.

2010 Jul – Don't trouble yourself to live in Bayshore Villa in Redwood City, California. Massive health and building code violations, out of control rent increases, lying and intimidation are all the order of the day. A case of the Bubonic Plague would be infinitely preferable to dealing with these uncouth louts. I have recently prevailed in court standing alone against them. If you are in suffering with their tyranny in any park in California, ask me how. It is my understanding they control about 200 parks nationwide. Good luck everyone.
Chris W.

2009 Jun – Residents of a Redwood City mobile home park where a small fire broke out early Monday morning speculated that it might be related to residents' frustration with the park's ownership. Several residents of the park said they believe someone may have set the fire out of anger because of several ongoing disputes between the park's ownership and residents.
The Mercury News

2020 Feb – Still in a state of shock after suddenly receiving a notice that their mobile home park near Redwood City may be sold to make way for apartments, dozens of low-income families are growing increasingly anxious about having to pull up stakes and move out.

Many of those who live in Bayshore Villa’s 137 lots are Spanish-speaking cleaners and gardeners, office workers and long-time Redwood City seniors who consider the park an affordable oasis amid a sea of million-dollar homes.

Apex Residential Management, the Villa’s management group, recently told residents it’s moving forward with conversations started four months ago to sell the mobile home park to a developer who plans to build an apartment complex there.
The Mercury News

Note: Click/tap on table headings to sort ascending or descending, click/tap the # column to reset. Items with a line through them have been sold. This data does not include all mobile home sales, it only includes those listings which can be found through publicly available resources.

Note: Click/tap on table headings to sort ascending or descending, click/tap the # column to reset. Items with a line through them have been sold.

Note: Click/tap on table headings to sort ascending or descending, click/tap the # column to reset.

Your Review/Comments have been submitted, thank you.

If you would like to share your story, submit a review, and/or information regarding Bayshore Villa MFTG Housing Community, click/tap the Review button. If you would like a response from the MHPHOA, please indicate that in your comments.

If you have documents, images, videos, etc., indicate that in your comments and we will forward you instructions for sending those materials to us. All reviews and materials are vetted prior to posting. Thank you in advance for sharing.

Submit a Review or Send Your Comments