1974 – A Million Californians Can’t Be Wronged

As only a 60 percent occupancy rate is needed in most parks to meet operational expenses, a mobilehome park owner has great leeway in the management of his park. The heavy cost of moving most mobilehomes is another factor placing all the controls in the landlord’s hands. Most moves cost between $300 and $800, depending on the distance involved and the size of the mobilehome. Chances of mobilehome damage are high during dismantling, transit and setting-up on the new site. As the purchaser of a mobilehome is the owner of his own housing unit, it is difficult for him to perceive he is also a renter – a tenant with only tenants’ rights. When first moving into a mobilehome park, the new mobilehome owner is more interested in space location, clubhouse and recreational facilities, and other park features than in the rental agreement in front of him. It usually does not occur to the prospective tenant that he has in writing what the landlord expects of him but his desires and questions have been given only verbal assurance by park management.

There are instances where mobilehome park rules are extraordinarily arbitrary. In some cases, park management feels the rules are merely to protect the property and provide an orderly living atmosphere for each tenant. In other cases, the intent is not as well-meaning. The following are examples of some of the more arbitrary mobilehome park rules some parks enforce.

Sometimes the unwritten rules, the arrangements with certain merchants or suppliers that they will have a monopoly on servicing the park for a certain fee or rebate, can cost the mobilehome owner a great deal more money than he thought. California law states that any changes in the rules accepted by a mobilehome tenant at the time of entrance may be amended at any future time with the consent of tenant or without his consent after he is given six months’ written notice. Many people feel forced to accept rule changes because of the prohibitive cost of moving a mobilehome, the lack of alternative park spaces, or the lack of an available space in a park that will accept an older model of mobilehome. Breaking the rules, without regard to whether the rules are arbitrary, is one of the five grounds for eviction from a mobilehome park as found in California Civil Code Section 789.5. It is easy to see, given some of the above listed rules, that a landlord could evict almost any tenant from his park.

There has been a deluge of complaints about mobilehome parks. Since there is no central agency authorized to handle these complaints, there is no way to count the number of complaints. However, every legislator with mobilehomes in his district, every consumer protection agency, every Attorney General’s office and District Attorney’s office has a file full. The complaints vary but include: abnormally high raises in the rent; removal of the mobilehome from the choice space promised verbally for the individual’s term of tenancy when he first moves into the park; retaliatory eviction for either a complaint to government officials or for forming or joining a mobilehome owners’ association; and special assessments for such activities as planting trees.

While the situation here is poor, California is still ahead of most states in regulating mobilehome parks. Entrance and exit fees which are incentives for park managers to evict old tenants are outlawed. A recent bill made it possible for a mobilehome to remain in the same park space, even if it was resold, for 10 years as long as certain requirements were met by the mobilehome (AB 702 - Wilson - Chapter 785, 1973 Statutes). In addition, the park owner still has the right to approve of the new buyer. California law also outlaws the transfer fee, a percentage of the resale deal which would go to the park management regardless of whether he had shown the mobilehome for the owner.

The eviction of a mobilehome tenant may occur only after 60 days’ notice and for one of five specified reasons. As found in Civil Code Section 789.5, they are:

While the current law heads in the right directions, it does not address some important issues. New legislation should include provisions for the following:

While a tenant’s right to file in the appropriate court should not be impaired, this administrative agency should be established to ease the burden on the courts and to make available a remedy to those mobilehome tenants who do not have the money needed to go to court.

Note: The content on this page was extracted from the PDF document titled “A Million Californians Can’t Be Wronged” pages 54-60 of 76. 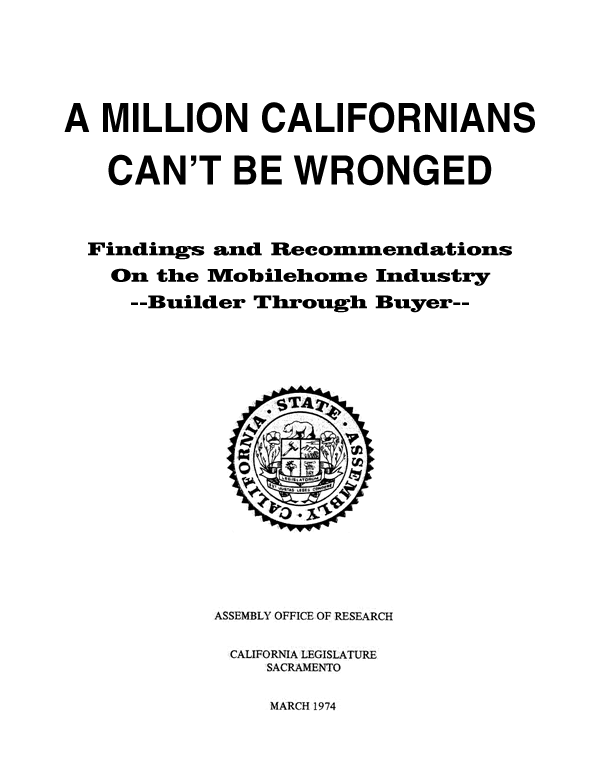 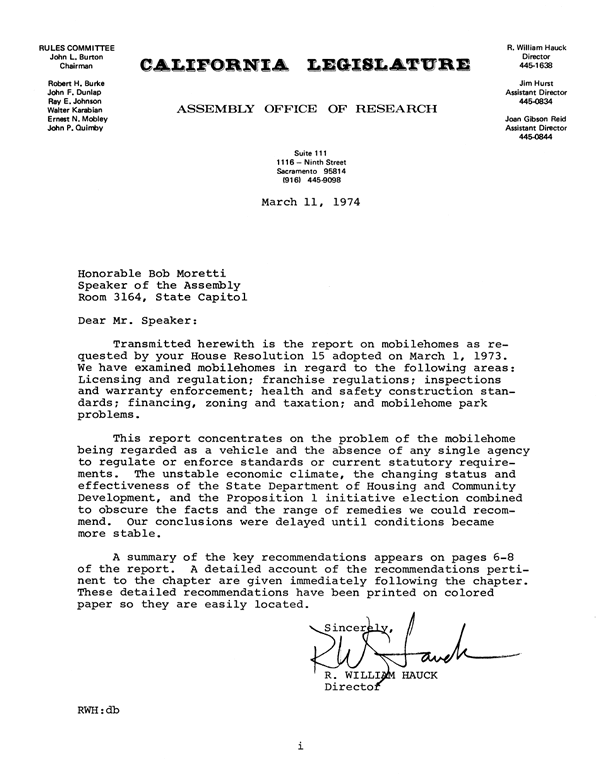 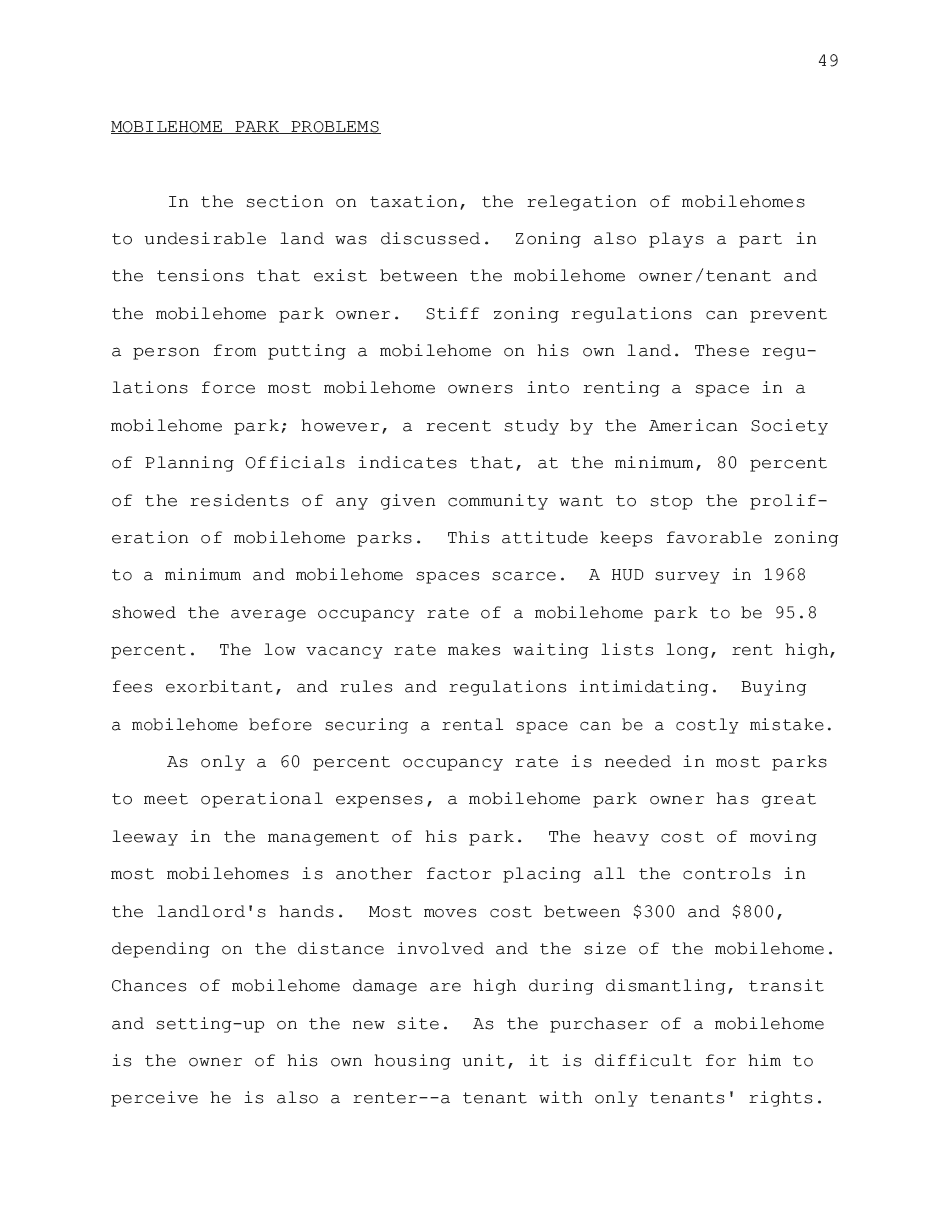 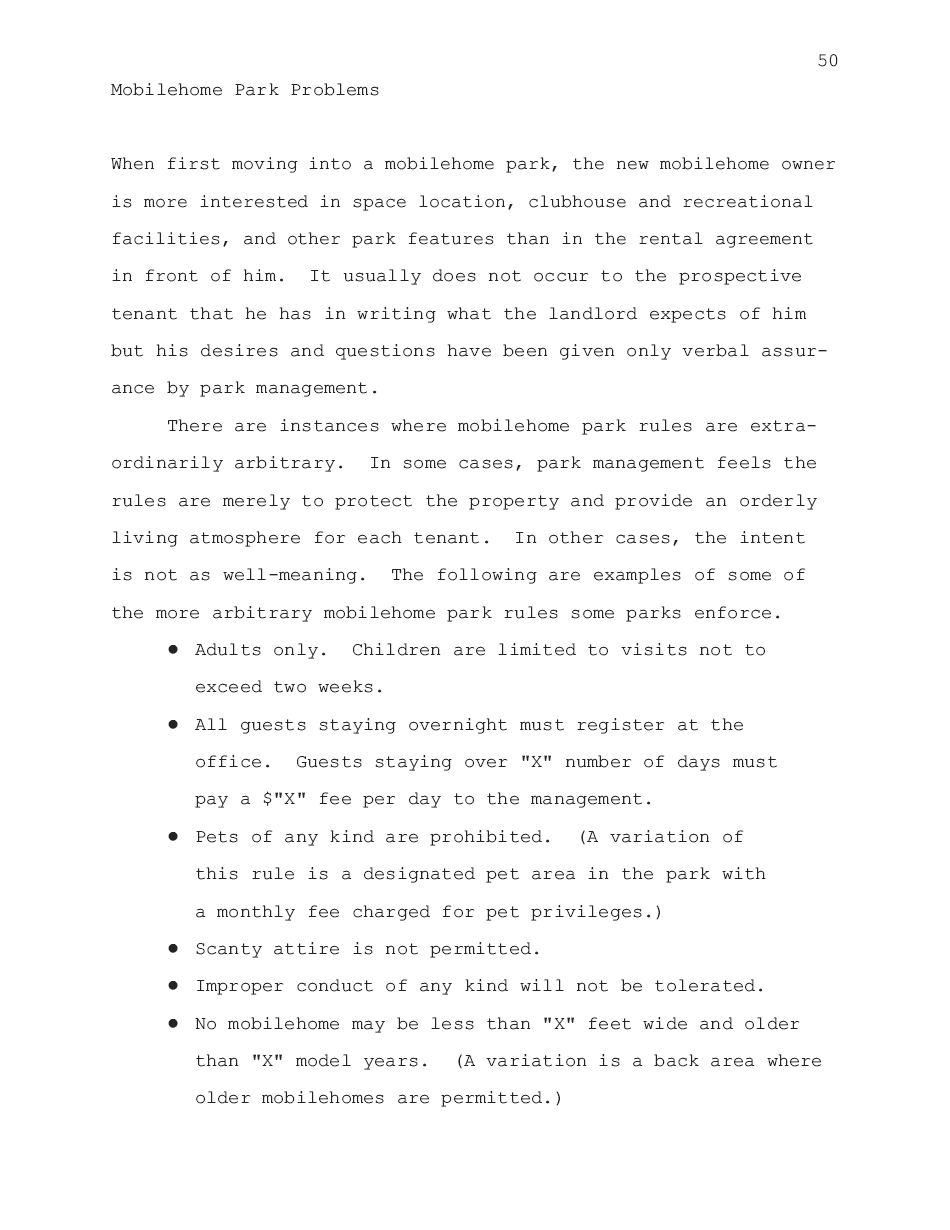 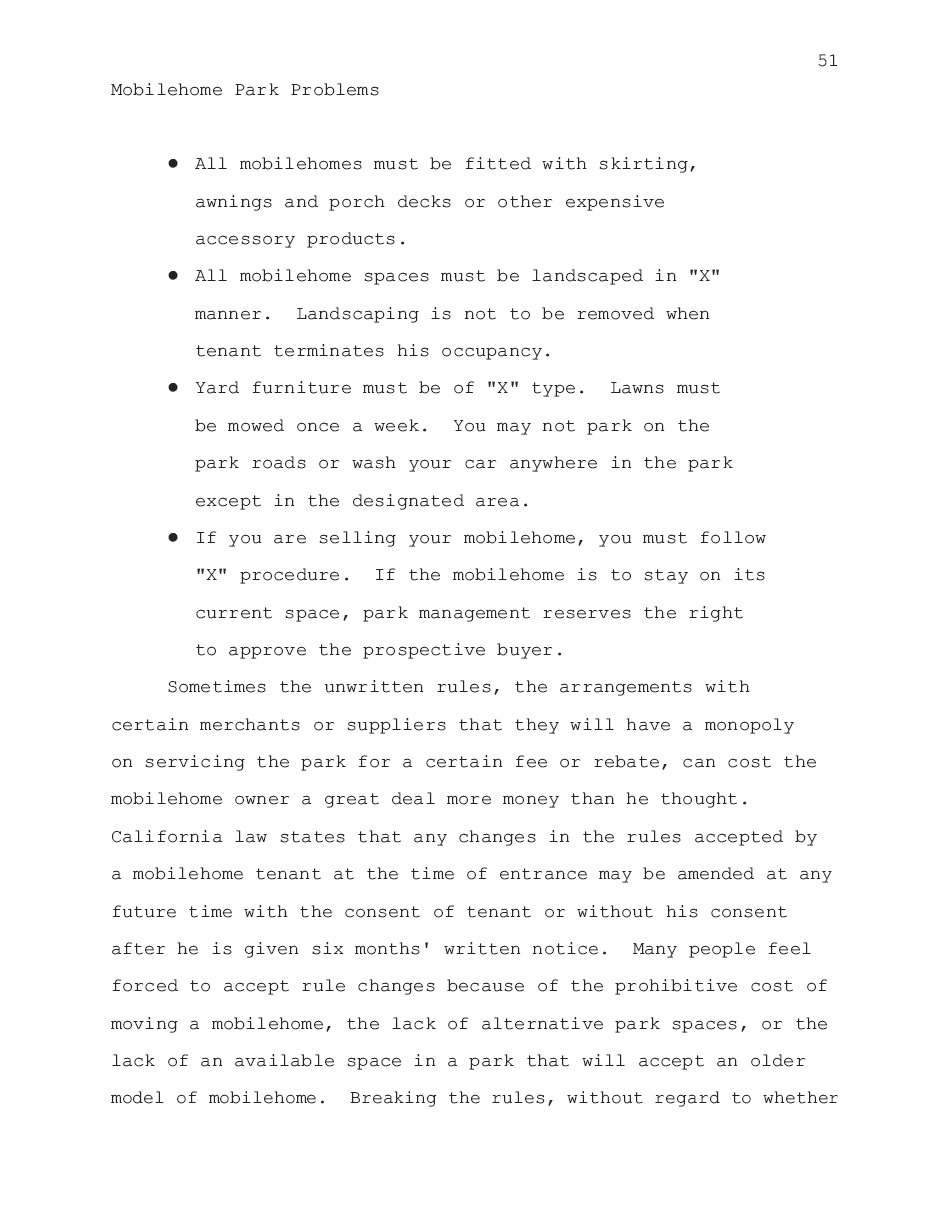 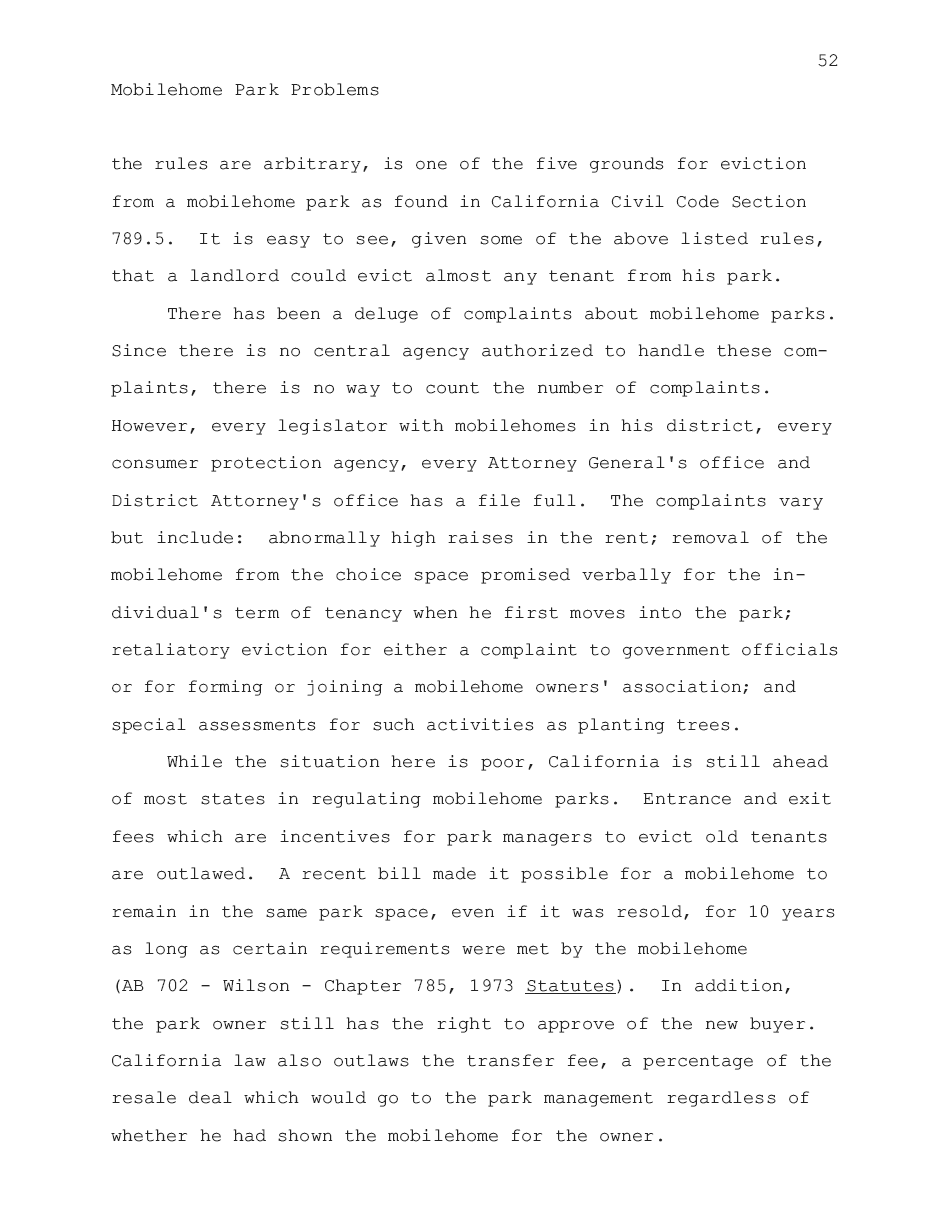 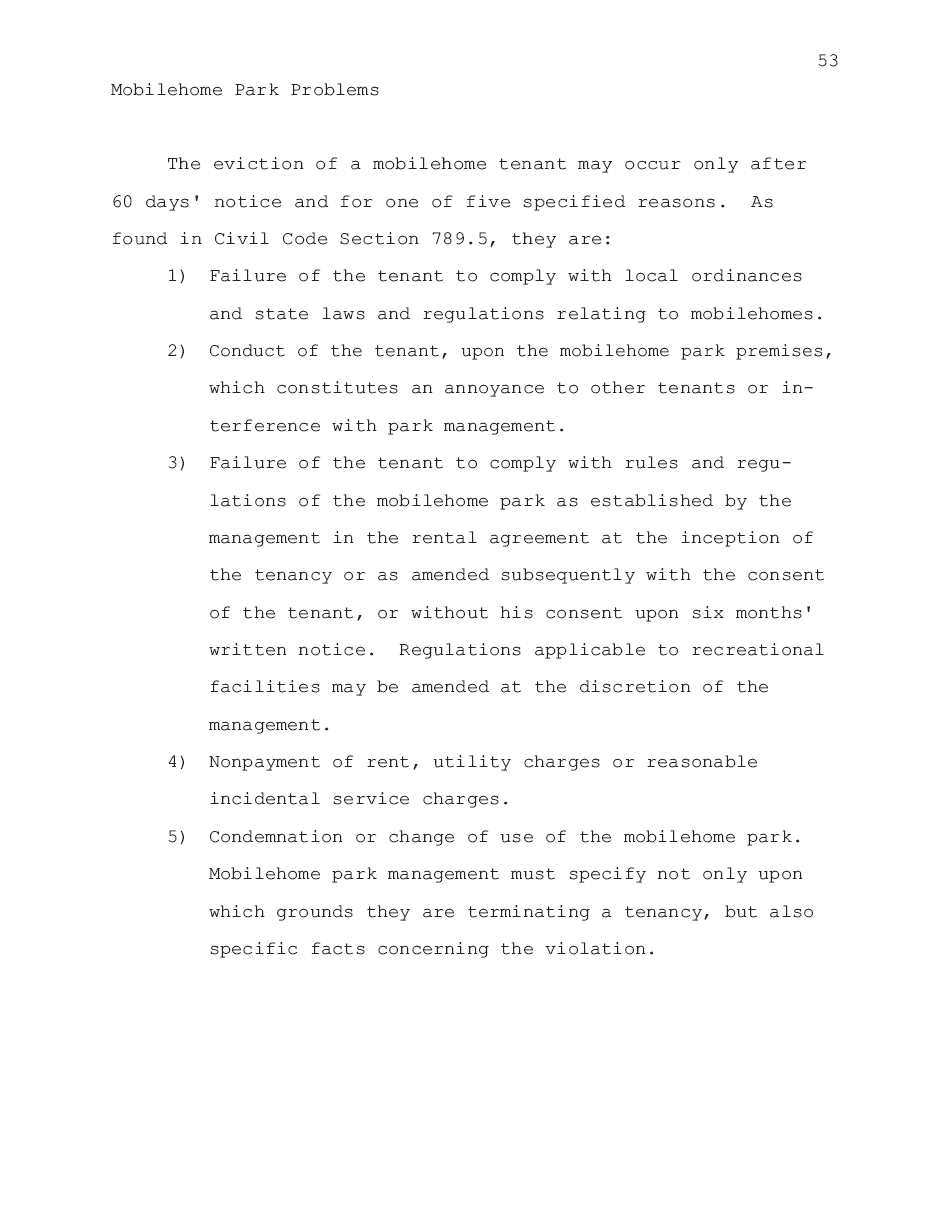 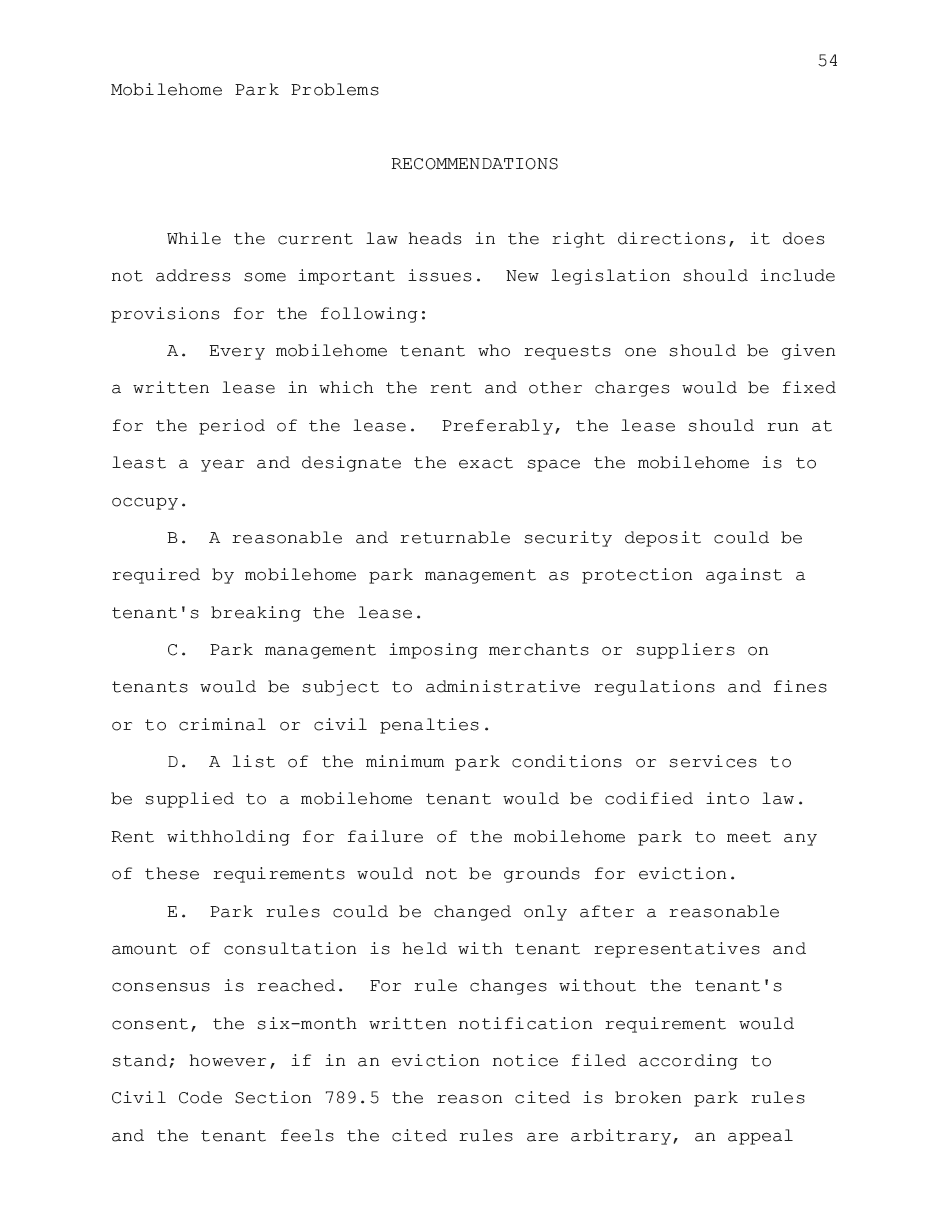 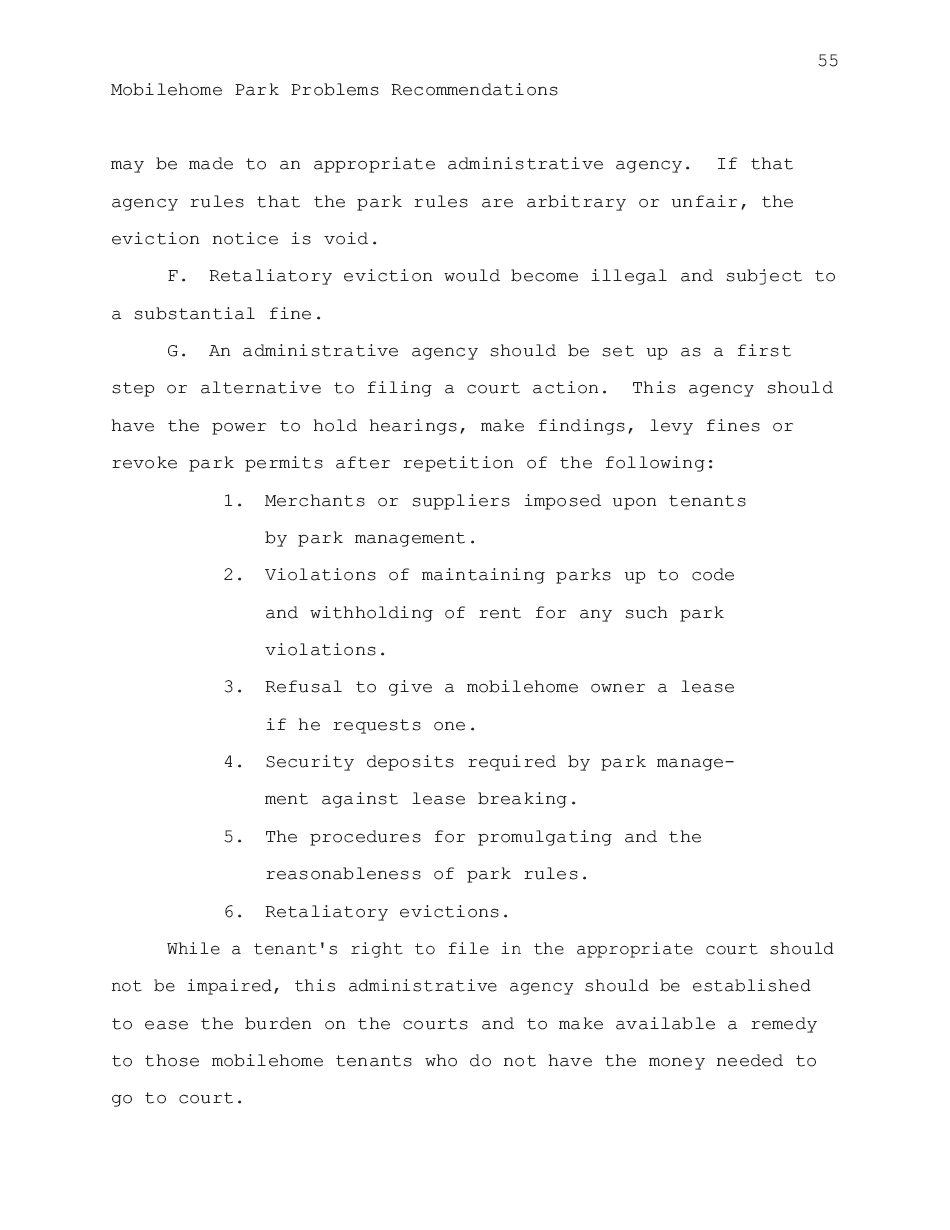