‘Rental agreement’ is an agreement between the management and the homeowner establishing the terms and conditions of a park tenancy. A lease is a rental agreement.

Note the phrase shall not include a clause…. Within the Sierra Corporate Management long-term lease agreement may be a Clause regarding an Addendum for free rent which is prefaced with an asterisk (*). That Addendum clause leads to a separate page titled Lease Addendum which contains the Park Owner Right of First Refusal to Purchase Home. This would appear to be in violation of Civil Code §798.19.5?

A particular and separate article such as an addendum, disposition and/or provision which makes up part of a deed, written agreement, lease agreement, rental agreement, and/or other written contract or will.

A contract clause is a specific provision or section within a written contract. Each clause in a contract addresses a specific aspect related to the overall subject matter of the agreement. Contract clauses are aimed at clearly defining the duties, rights and privileges that each party has under the contract terms.

(3) The beginning monthly rent shall be $0,000.00, which shall remain in effect until the first anniversary date (or rent adjustment date) which is Month Date of each calendar year. Each anniversary date, then current monthly rent shall be adjusted based upon 100% of the annual increase in the Consumer Price Index (CPI) for the County area (1982-1984 = 100), utilizing the "All Urban Consumers" index as of the most recent month available at the time of the giving notice of the increase to Tenant. In no event shall the annual increase in the rent be less than six percent per month of the then last charged monthly rent. In the event that the CPI index is discontinued or revised, another governmental index then in existence shall be selected by Owner and used to obtain substantially the same result as if the CPI index had not been discontinued or revised. *Addendum: Resident shall receive free rent (M/D/YY-M/D/YY). Space rent for the first year shall be $0,000.00 (M/D/YY-M/D/YY). All subsequent annual rent increases shall remain as indicated herein. Addendum rent is only valid for original tenant and is not transferable/assignable to assignees/future residents.
Sierra Corporate Management Long-Term Lease Agreement

Does your Sierra Corporate Management Lease Agreement have a one (1) page Addendum attached? Does it read something like this?

Park owner agrees to the discounted space rent listed on page 4 of this lease agreement; in exchange, tenant agrees to the following: 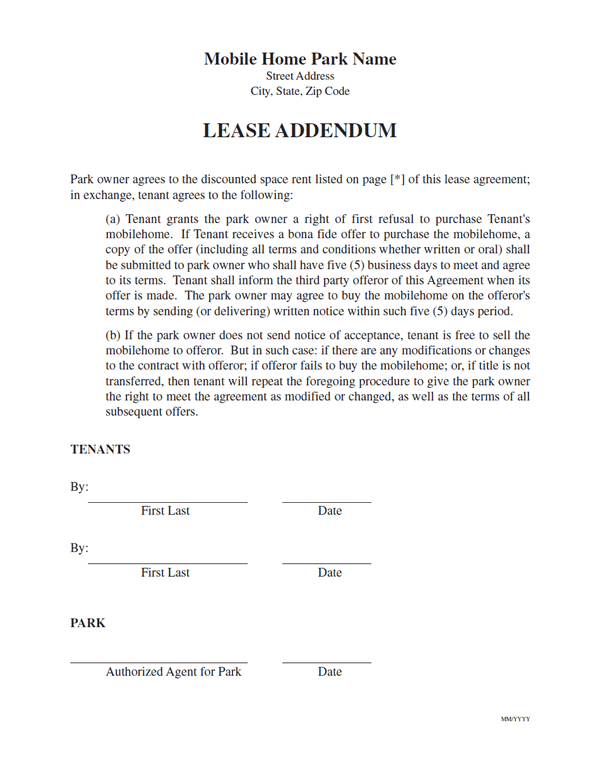 What Does All of this Legal Mumbo Jumbo Mean?

From our perspective, when you purchase a park owned or affiliate owned mobile home with or without a space rent special in a KSFG/SCM mobile home park, your purchase price, the amount you pay, is basically a non-refundable deposit. You are now a mobile home renter, you really don't own your mobile home after you've signed the plethora of Sierra Corporate Management documents. Your personal property (mobile home), and possibly your chattel mortgage, may now be Encumbered by KSFG/SCM.

Encumbrance means a lien or claim on property. It is a burden or claim over a property that is binding on the property. An encumbrance can affect the clarity of a good title, or diminish the value of property. However, it will not prevent transfer of title.

An encumbrance is a right to, interest in, or legal liability on real property that does not prohibit passing title to the property but that diminishes its value.[1] Encumbrances can be classified in several ways. They may be financial (ex: liens) or non-financial (ex: easements, private restrictions). Alternatively, they may be divided into those that affect title (ex: lien, legal or equitable charge) or those that affect the use or physical condition of the encumbered property (ex: restrictions, easements, encroachments).[2] Encumbrances include security interests, liens, servitudes (e.g. easements, wayleaves, real covenants, profits a prendre), leases, restrictions, encroachments, and air and subsurface rights. Also, those considered as potentially making the title defeasible are encumbrances, e.g. charging orders, building orders and structure alteration. Encumbrance: charge upon or claim against land arising out of private grant or a contract.
Wikipedia – Encumbrance

Some of you reading this probably don't have the Title for your mobile home? It may still be in the previous owner's name or it may be in the KSFG DBA name of Two Palms Real Estate or Tri Palms Ventures.

If you have not received the Title to your mobile home within twenty (20) days after purchase, contact the State Department of Housing and Community Development’s (HCD) Registration and Titling Division at 800-952-8356 for immediate assistance.

Find out more about who your mobile home is registered to. Do you know what your HCD Decal Number is/was?

No Title for Your Mobile Home?

No Title for Your Mobile Home? If you have not received your Title within twenty (20) days after purchase, contact the State Department of Housing and Community Development’s (HCD) Registration and Titling Division at 800-952-8356 for immediate assistance.

This bill would prohibit any mobilehome park rental agreement entered into after January 1, 2006, from including a term granting the park owner a right of first refusal should the mobilehome owner decide to sell his or her mobilehome.

Existing law does not prevent a mobilehome park rental agreement from granting a right of first refusal to the park if mobilehome owner attempts to sell the mobilehome to a third party.