Thu, Jul 19, 2018 – Register Your Mobilehome California, a limited-term state program waiving past-due registration fees and taxes for mobilehome and manufactured homeowners hit a major milestone in July, having saved homeowners more than $1 million since its launch in 2017.

Register Your Mobilehome California, administered by the California Department of Housing and Community Development (HCD) allows people who acquired a mobilehome or manufactured home but didn't get the proper registration to obtain current title and registration without paying back taxes and fees. The program is saving owners hundreds or even thousands of dollars.

State officials estimate as many as one of every three mobilehome owners may be able to benefit from Register Your Mobilehome California.

The program gives owners the opportunity to register their property and avoid paying back fees and taxes, while also ensuring their families have a secure and stable place to call home," said HCD Director Ben Metcalf. Homeowners have the opportunity to get proper title and registration, while saving money and getting peace of mind.

Mobilehome and manufactured homeowners can take a quick test to find out if they could be eligible. Potential applicants can also view a 15-minute video explaining how to apply.

Because the program is set to expire December 31, 2019, mobilehome owners are encouraged to apply as soon as possible.

A recent mobile home for sale/sold listing (Cash Only) on MHVillage.com shows space rent at $2,166. This is a 268% increase in thirteen (13) years.

Directly across the street from Tustin Village Mobile Home Park is the 163 space Saddleback Mobilodge Club (55+) which is Family Owned and space rents are advertised at $875 per month – a 147% difference.

Tustin Village Mobile Home Park was a 55+ park in 2005 and converted to All Ages after purchase by a Kort & Scott Financial Group DBA. 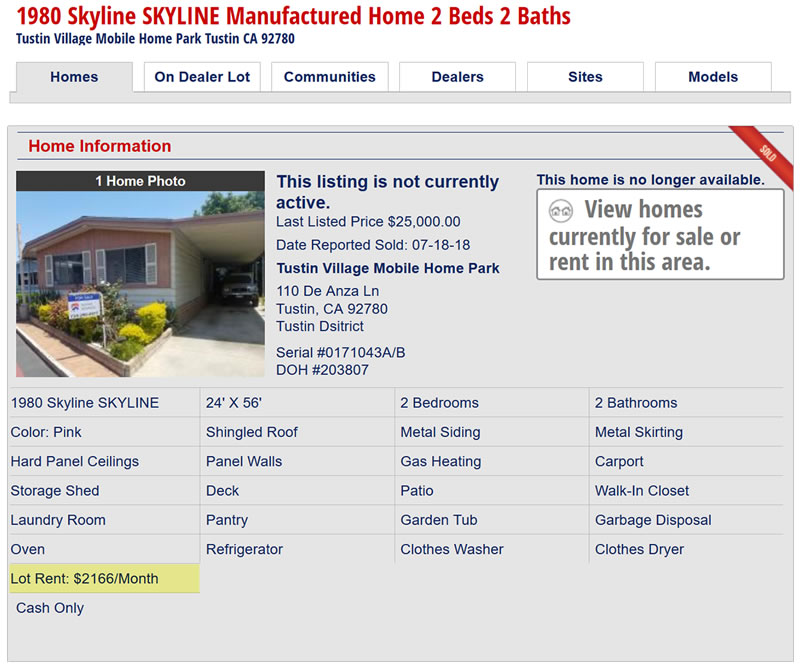