HCD ensures that licensed mobilehome/manufactured home dealers and salespeople comply with laws and regulations governing licensing, escrows, and sales by educating, investigating complaints and illegal practices, and taking appropriate action against violators, including referrals to agencies that can prosecute.

Consumer complaints alleging violations are investigated by HCD field staff. When a violation is found, HCD issues an order to comply (if the situation can be corrected); and/or issues a citation or files an accusation asking an administrative law judge to revoke or suspend a license and often require the licensee to pay restitution to consumers harmed by the acts. In more serious cases, HCD can request the local district attorney or attorney general to file criminal charges.

This was the case when more than two dozen mobilehome owners in California were sold below-standard homes without notification about the homes’ defects, later resulting in homeowners facing fees and penalties, violation notices, and/ or eviction for not repairing their homes in a timely manner. In addition, many victims never obtained title and ownership of their homes after the sale, while others fought for years before titles were transferred into their names.

Following a joint investigation by HCD and Yolo County into the fraudulent practices of a formerly licensed mobilehome dealer/salesperson operating in Davis, Tustin, and Covina, a settlement was reached in which Western Ventures LP, Abraham Arrigotti, and Drita Bronkey agreed to pay restitution, with $100,000 distributed to all homeowners who filed claims, reimbursing them for the costs of their homes.

Sacramento – More than two dozen mobile home owners in California will be reimbursed for the costs of their homes thanks to a settlement reached following a joint investigation by the California Department of Housing and Community Development (HCD) and Yolo County into the fraudulent practices of a former licensed mobile home dealer and salesperson in Davis, Tustin, and Covina.

As part of the settlement, Western Ventures LP, Abraham Arrigotti, and Drita Bronkey agreed to pay $175,000 in restitution. Most of the money, $100,000, will be distributed to all affected homeowners. The remaining $75,000 will go to reimburse the costs of the investigation and legal costs incurred by HCD.

The affected homeowners were sold below-standard homes without notification about the homes’ defects, later resulting in homeowners facing fees and penalties, violation notices, and/or eviction for not repairing their homes in a timely manner. In addition, many victims never obtained title and ownership of their homes after the sale, while others fought for years before titles were transferred into their names.

Mobile homes and manufactured homes are often the only affordable choice for many Californians, said HCD Director Ben Metcalf. HCD’s authority to hold licensed mobile home dealers and salespeople accountable is part of the bigger picture to ensure every Californian has access to a safe, affordable home.

HCD’s occupational licensing investigators and Legal Affairs Division thoroughly investigated and prosecuted the case with the assistance of Yolo County governmental offices, including the District Attorney's Office and the Office of Yolo County Supervisor Jim Provenza, who helped set up a task force with the County Sheriff and provided translators for affected homeowners who filed claims.
HCD Press Release 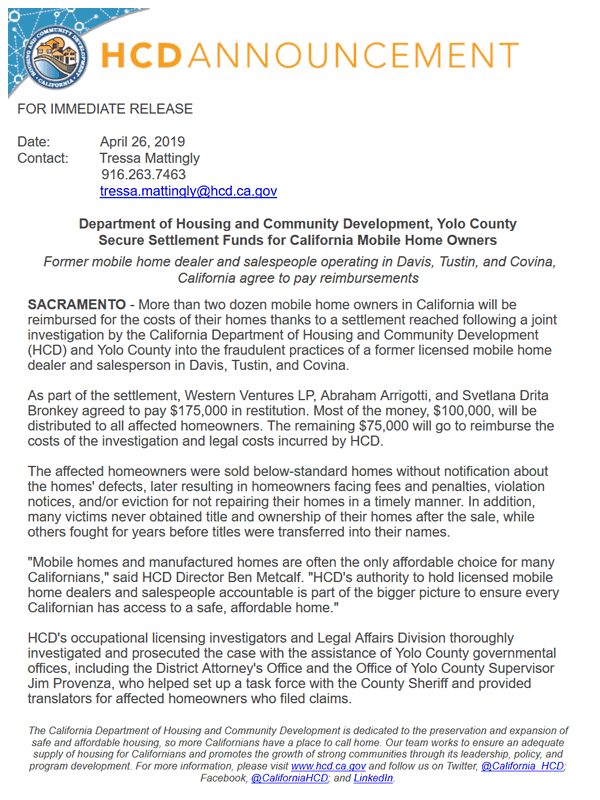 One year later, on Friday, March 25, 2016, The People of the State of California (Plaintiffs) filed a Complaint for Injunction, Civil Penalties, and Other Equitable Relief against Davis Group LP, Sierra Corporate Management Inc, Western Ventures LP, Abraham Arrigotti and DOES 1 through 20 inclusive.
CV16-500 Complaint

On Tuesday, August 2, 2016, The People of the State of California won a Final Judgment and obtained an Injunction against Davis Group LP and Western Ventures LP.
CV16-500 Final Judgment

Davis Group, L.P. and Western Ventures L.P., owned and operated Royal Oak mobile home park until it was sold in April of 2015. The civil complaint filed by the Yolo County District Attorney’s Consumer Protection Division alleged that between 2012 and 2015, Royal Oak did not properly inform buyers of various required information related to the sales of the homes. With the assistance and participation of local and state agencies, the case was investigated and filed earlier this year.

As part of the settlement, Davis Group, LP. and Western Ventures L.P., agreed to pay up to a total of $22,000 in restitution to buyers of mobile homes who suffered undisclosed and unreimbursed costs at the time of their purchase of their homes.

Anyone who purchased a mobile home in the Royal Oak mobile home park and suffered unreimbursed costs that were not disclosed at the time of the purchase, or earlier, is urged to contact the Yolo County District Attorney’s Office. English speakers can call (530) 666-8434 and Spanish speakers can call (530) 666-8416.
Yolo County District Attorney

Office of the District Attorney 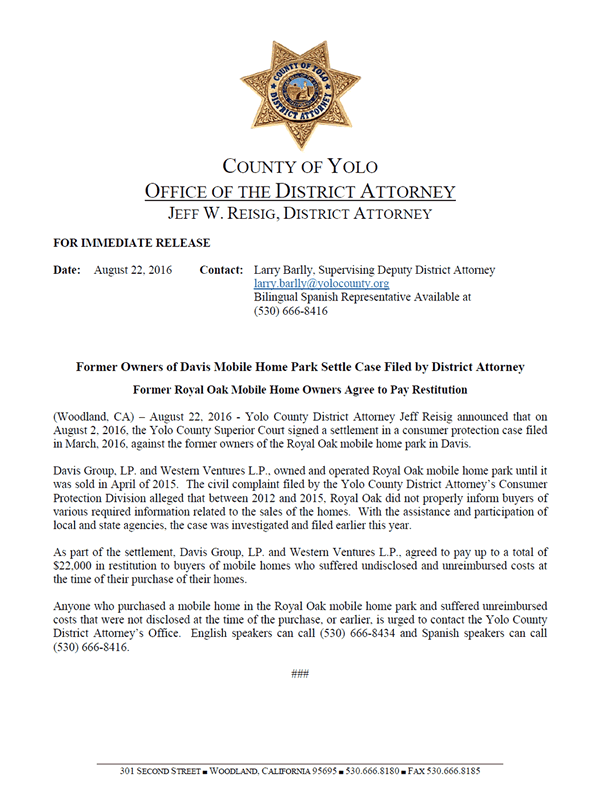 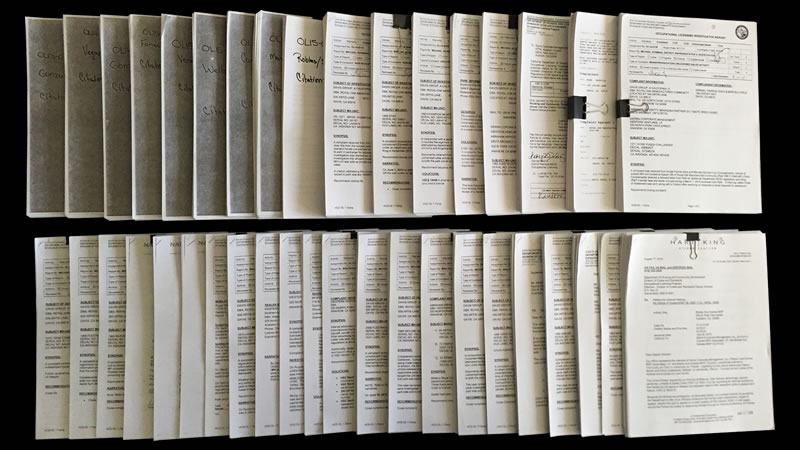 Thu, Jan 28, 2016 – What you are seeing in the image below are thousands of documents titled "Investigative Report" which are from the California Department of Housing and Community Development (HCD) filed against Kort & Scott Financial Group DBAs. This information is available through a Public Information Request which we have filed for all of the KSFG parks that we are aware of in the State of California.

This is only a small portion of the requests and pertains mostly to one mobile home park, Royal Oak Manufactured Home Community in Davis, California which was sold by the KSFG DBA in April 2015. It appears that KSFG were forced out of this park by the continual violations by the HCD, each one costing Kort & Scott Financial Group $2,000. In one set of these documents, Hart King, Attorneys at Law, acting on behalf of the KSFG DBA state this...

Dear OL Ombudsman Coordinator: We represent Davis Group, LP, the party subject to the above 11 citations. On April 22, 2015, we wrote to the Division of Codes and Standards Deputy Director requesting on behalf of our client, stating our objections to all of the Citations, and requesting an Informal Hearing. We have recently been advised that the Hearing Officer desires to hold 11 separate hearings as opposed to one single hearing even though the alleged violations are all similar. As a result, Davis Group LP has decided, for business and financial reasons only, that it is more sensible to pay the civil penalties. Among other reasons, the costs of preparing for and attending 11 separate hearings, which would include the hourly and travel expenses of counsel, expert witnesses and percipient witnesses, would far exceed the amount of the civil penalties, and it would take valuable personnel away from their jobs for an extended period of time.

We are therefore enclosing 11 checks from the Davis Group, LP, $2,000.00 each, covering each citation payable to the Department of Housing and Community Development, and requesting that the 11 Informal Hearings be taken off-calendar. Please confirm that this has been done at your earliest opportunity.

Please be advised that the payment of the civil penalties cannot and should not be considered an admission of any wrongdoing or liability on the part of the Davis Group for any of the violations appearing in the Citations or under any other law. The Davis Group is simply making the $22,000 in payments for business reasons, and continues to deny all liability under the Citations for, without limitation, the reasons stated in my April 22, 2015 letter to the Deputy Director.

Why haven't you taken this ‘Preponderance of the Evidence’ to the Office of the Attorney General for the State of California?

Mon, Mar 19, 2015 – Mobile home parks run by Sierra Corporate Management have become a statewide problem because of highly questionable business practices and management. A task force, including District 4, the District Attorney, Yolo County Housing Authority, Legal Services of Northern California, the CAO, the Assessor, the Sheriff, the State Department of Housing and Community Development, and County Counsel, has been formed at Yolo County to investigate and respond.

The County BOS office is receiving many calls from the residents in the Royal Oaks Mobile Home Park because of hazardous fire conditions, title issues, allegations of fraudulent business practices, and units in ill repair. Most of the residents are low income and do not have extra funds for repairs or charges made by the owners. D. Ewing suggested a possible donation of funds to provide CO detectors to these residents. Provenza will investigate this option and report back at the next meeting.
EDCFPD Minutes of March 2015