The general rule is that an occupational license is required for persons involved in the purchasing and selling of manufactured housing units.
HCD Information Bulletin 2014-01 (MH, MP, OL) 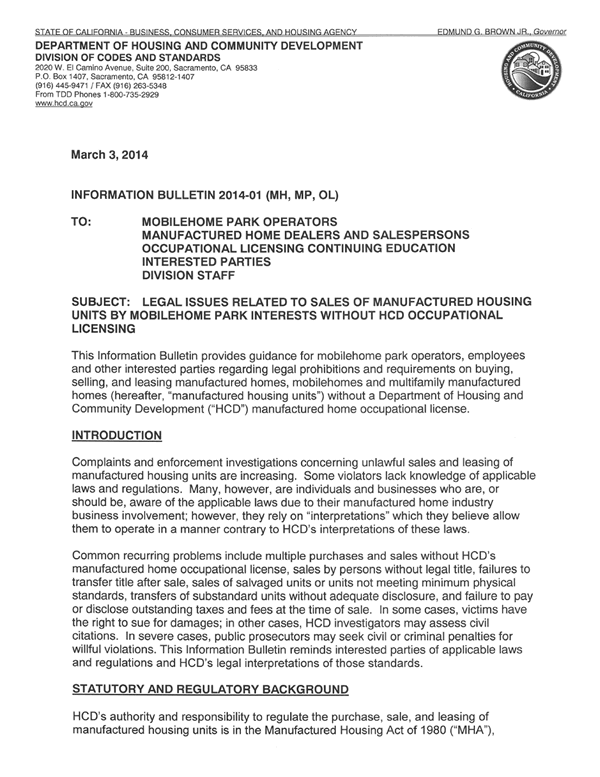 Many manufactured housing transactions currently occurring involve violations of State laws and regulations, and should be handled by HCD or BAE licensed sales personnel. As a result, California consumers are being deprived of various rights and protections including adequate disclosures, clear purchase/sales agreements, fair escrows, and decent and safe manufactured homes and mobilehomes. In many cases, these problems occur because of lack of information regarding state requirements; in other cases, erroneous interpretations of state requirements are taking place with potential civil and criminal consequences to those involved as well as financial harm to victims purchasing the homes. Park operators selling or leasing park-owned manufactured housing should consult with their attorneys as to the rights and obligations of both the lessors or sellers and the lessees or buyers, and other park employees also should consult as appropriate regarding their rights and obligations.

Located at 1318 Second St., between Santa Monica Boulevard and Arizona Avenue, just one block from Santa Monica’s famous Third Street Promenade, Chelsea Santa Monica is within three blocks from the beach and just minutes from several dining, shopping and nightlife options. The community features studios, one- and two-bedroom units, ranging in size from 403 to 572 square feet.