Tue, Sep 15, 2020 – Anaheim Mayor Harry Sidhu might face a recall election after seniors from a mobile home park have started collecting signatures to toss the mayor out for refusing to consider rent control as well as his leadership on the Angel Stadium sale.

After going to the council meetings and trying to talk to Sidhu, he just ignored us completely. And then, there was the whole bit about the stadium – just kind of giving it away. People are getting more and more upset with him,” said Rancho La Paz resident Cheryl Moi.

Fri, Sep 11, 2020 – The MHPHOA attended Bruce Stanton’s Telephone Townhall on Fri, Sep 11, 2020 from 1:30 to 3:00 PM. During the Townhall, clarification was provided on AB 2782 and Section 798.17 of the Civil Code (Mobilehome Residency Law). The passing of this bill is a major victory and only applies to mobile home owners who live in a city or county that has a Rent Stabilization Ordinance (RSO).

In summary, here are the changes that will take place on Fri, Jan 1, 2021. The term rental agreement is synonymous with long-term lease. Rental agreements longer than 12 months are usually referred to as long-term leases and “used to be” exempt from local rent stabilization ordinances.

Purchase homes in the park to remove them from rent control.

Once homes are purchased, we’ll sell them to new residents with a 10 year lease, or allow current residents to continue to live there as renters instead of owners. The plan is to convert 12 per year in this manner and bring the park to market rents over a conservative 10-year period.

The repeal of Section 798.17 will close a major loophole in the California MRL and we wish to thank everyone who was involved in the drafting and promotion of this bill – the list is long!

Mon, Aug 31, 2020 – Governor Gavin Newsom today announced that he has signed legislation to protect millions of tenants from eviction and property owners from foreclosure due to the economic impacts of COVID-19. These protections apply (PDF) to tenants who declare an inability to pay all or part of the rent due to a COVID-related reason.

The Governor also announced that he has signed the following bill: AB 2782 by Assemblymember Mark Stone (D-Scotts Valley) – Mobilehome parks: change of use: rent control.

SECTION 1. The Legislature finds and declares all of the following:

(a) Based on data released by the Department of Finance in May of 2019, there are approximately 560,000 mobile and manufactured homes in the State of California.

(b) The economic hardships brought on by the COVID-19 pandemic will likely cause many households difficulty in remaining current on their rental or mortgage housing payments through no fault of their own.

(c) A study released in June of 2017 by the Rosen Consulting Group and the University of California, Berkeley suggests that the economic and health impacts of a widespread economic crisis, such as the one currently being experienced due to the COVID-19 pandemic, is likely to disproportionately impact mobilehome residents, who are typically older than the general population.

(d) Without emergency action to prevent the displacement of mobilehome residents who have fallen behind on space rental payments, there will likely be a significant increase in homelessness, exacerbating the ongoing homelessness crisis in the state.

(e) Those experiencing homelessness will not be able to comply with public health orders related to social distancing and self-quarantining, nor will they have access to facilities for maintaining good hygiene.

(f) According to the Mobile Home Park Home Owners Allegiance, as of March 3, 2020, there were nine counties and 83 cities throughout California that enacted mobilehome rent stabilization ordinances that provide residents with tenant protections against unexpected and substantial rent increases.

(g) There is a current and immediate threat to the public health, safety, and welfare of California residents and a need for the immediate preservation of the public peace, health, and safety that warrants the amendments to Section 798.17 of the Civil Code, as set forth in this bill, based upon the facts set forth in this section.

(i) This section shall not apply to any rental agreement entered into on or after January 1, 2021.

This bill would instead require the management to give homeowners at least 60 days’ written notice that the management will be appearing before a local governmental board, commission, or body to obtain local approval for the intended change of use of the mobilehome park.
AB-2782 Mobilehome Parks: Change of Use (2019-2020)

Thu, Mar 5, 2020 – On behalf of [Organization], I am proud to write in support of your bill, Senate Bill 999, which would restore local control and help ensure rent affordability for mobilehome residents by removing a state-imposed loophole in local mobilehome rent stabilization ordinances. Loopholes in state law to local rent stabilization ordinances have undermined local control and prevented any effective safeguards against rent abuse from being implemented.

When it comes to the issue of rent affordability for mobilehome residents, state law has been a part of the problem, not the solution, said Senator Umberg. Senate Bill 999 will provide local governments with a real opportunity to make community-informed decisions that protect residents. Our housing crisis demands solutions at every level, for all incomes, and all kinds of homeowners and renters, continued Senator Umberg.

Senate Bill 999, coauthored by Assemblymember Monique Limón, would remove a loophole in state law that has effectively prevented local governments from enforcing their own rent stabilization ordinances for mobilehome residents. Current law prevents local rent stabilization ordinances from applying to any mobilehome resident with a lease longer than 12 months. 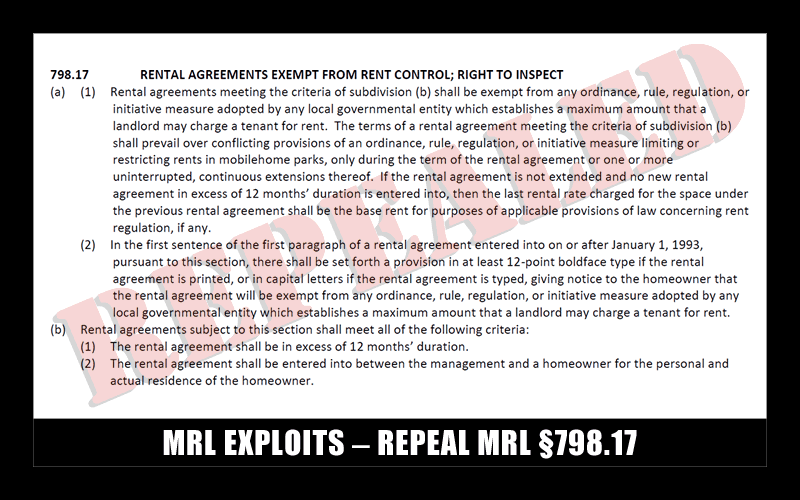 Sep 2020 WMA Legislative Update – AB 2782 (Stone, D-Santa Cruz) passed with 42 votes in the Assembly, this is the bill that was amended with the SB 999 (Umberg, D-Orange County) language, which was defeated in the Assembly Housing and Community Development Committee.

This “Jail Break” bill set a precedent in the Assembly by allowing a bill killed in policy committee to be inserted into another bill that bypassed the committee process to be passed on the Floor with a bare minimum of votes. WMA and our allies (CMPA, the California Association of Realtors, and the Security Investment Company) worked this bill tirelessly, and that is a large reason the bill passed with a bare majority instead of a supermajority. The park closure portion of this bill, while largely watered down, still has problems including requiring in-place value and other changes.

AB 2782 has already been signed by the Governor, Chapter 35, but it should face significant legal challenges in the Courts due to Constitutional issues involving the interference of private contracts along with other issues.
Chris Wysocki, WMA State Legislative Advocate